Brownfields redevelopment projects require a lot of environmental field work.  A lot.  In some cases, a project may require weekly visits during the entire construction timeline.  Sometimes daily visits.  And when a Brownfields redevelopment project lasts 18-24 months, that’s a lot of routine site visits.  Which equates to a boatload of field forms.  Unless you have a good process in place, managing boatloads of hand-written field forms on a regular basis for a Brownfields project will become unwieldy quickly.

Just imagine if these were paper forms, collected daily for a period of 12 months.  That’s at least 20 field forms per month x 12 months = 240 paper forms that will need to be scanned to email, extracted from email, and then uploaded to a cloud storage site.  Have you thought of the file naming convention for these forms?  What if its not consistent?  Hell, it’s NEVER going to be consistent if humans touch it.  Or put there on a timely basis.

And what about photos?  If you take just 3 photos per day, that’s 720 photos.  How are those being managed?  Is someone dumping all these images to their laptop, and then transferring them to a Dropbox folder?  How will you know which photo was taken when?  Are you renaming each photo, so that unintelligent image file names like img_9214.jpg are renamed to something like 2022-08-24_AOC_Inspection_John_Smith.jpg?  What if multiple people are involved?  How will that impact any semblance of consistency in file naming?

For purposes of this article, we are going to assume that the environmental investigation phase has been completed, areas of concern have been delineated, the regulators are satisfied with the proposed action plan, and we are stepping into the construction phase.

From my experience, two types of routine field work are common at this stage of a Brownfields project: Area of Concern Inspections and Vapor Intrusion Mitigation System (VIMS) Inspections.

Scenario: An area of elevated metals contamination was discovered in shallow subsurface soils during the investigation phase.  This area was delineated, and the proposed plan is to monitor construction activities to ensure this AOC is not disturbed during the heavy equipment construction phase.

While each AOC is unique in its own way, and may require specific things to check for that may not apply to another AOC, it’s best to try to “genericize” these as much as possible.  Using table grids in your field forms helps with this.  The example below is from Mid-Atlantic’s version of an AOC inspection form template running on a phone.

And here’s the output format of this AOC inspection form illustrating a completed/submitted form.

Scenario: An area of volatile organic compound (VOC) vapors in shallow subsurface soils was identified at the location of a proposed building footprint. An active VIMS is being installed, which will consist of vapor barriers and sub-slab depressurization via a blower connected to a suction pit dug into the slab in order to vent vapors outdoors.

Here’s what the Mid-Atlantic VIMS Inspection form template looks like on a phone.  You can see how you could add rows to the checklist table to handle most of your particulars.  Just remember to keep your forms simple.  In the case of field forms, a “less is more” approach is the best course of action, as your field folks are busy already and don’t need to spend gobs of valuable field time filling out forms.  The idea is to get them in and out of your form as quickly as possible.

Here’s an example of a submitted VIMS Inspection form.

Once you start using a digital system like XForms to collect field data digitally, there are all sorts of ways to leverage that data and optimize your workflows.  Examples:

Here’s a visual example of an integration from XForms to OneDrive/Sharepoint.  Whenever a user submits a Brownfields form (or any form) into the system, an integration picks up the auto-generated PDF and inserts it into the appropriate project folder on OneDrive, which is mapped to Sharepoint.  In the animated gif below, notice that the filenames all follow a consistent pattern, something that would be near impossible if humans did this.

Another, albeit similar, example.  An integration extracts all photos taken with XForms, and inserts them into a specific “Photos” folder inside the project folder.  This is something useful for long-term Brownfields redevelopment projects, as you can easily see the site’s progress and changes over time fairly readily.  Also notice that the image filenames have consistent names that can be used for sorting and for finding specific ones easier.

What about Brownfield sites reconnaissance surveys, to assess potential sites for redevelopment grants?

Yup.  Those are easy. Here’s an example: Mid-Atlantic Associates was recently awarded the management of a Brownfields redevelopment grant from Warren County, NC.  As part of their work, Mid-Atlantic personnel conducted reconnaissance throughout Warren County for about 4 days in October 2022.  This entailed driving around the County to identify potential sites for the Brownfields program.  A Brownfields Inventory Survey form was built in XForms to capture relevant information, including Site Information, Site Score ranking information, photos, and notes.  Listboxes were used to capture focus areas, property type (e.g., gas station, dry cleaner, industrial, etc), whether the property was vacant or occupied, acreage involved, and so forth.

Here’s a short video of the form that was designed.

And here’s a short video of a completed form.

XForms’ simple dashboard was then used to aggregate the information collected.  For example, you could easily see how many proeprties of a certain property type were surveyed, or how many properties were surveyed per city within the County, etc. 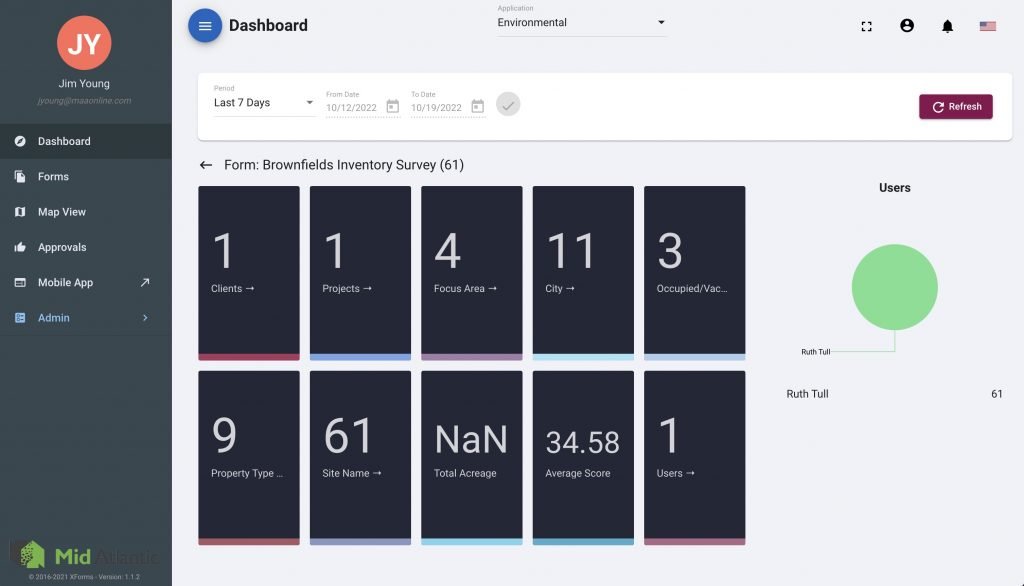 And since XForms automatically collected geolocation data, all of the forms were tagged by location, making it easy to view where these locations are on a map.

In addition, all of the data collected was automatically aggregated this way, with PDF versions of each surveyed site also automatically created, emailed to the Mid-Atlantic Project Manager, and uploaded into OneDrive/Sharepoint.  This cut out gobs and gobs of tedious and costly labor.

Here’s a video of the dashboard in action.

We love solving challenges like these.  Click/tap the button below to get in touch with us about your specific needs.