Yup.  As the saying goes, size definitely matters, but in this case, small is better.  Tiny is even better 🙂

Note: I’m not suggesting that photos are evil when it comes to attaching them to field forms.  On the contrary, photos are amazing and super powerful story tellers.  However, you need to be careful with photos…I generally advocate taking the minimum number of photos that will tell the story you are trying to tell.  In other words, don’t take 20 pictures of the same thing, from different angles, etc.  That’s just a waste.  Think of the end user trying to sift through all those similar pictures.  Not fun.

And with today’s modern phones, a normal-sized photo will be somewhere in the range of 2-4 Mb in file size.  Now let’s do some basic math:

In the above example, you will end up having to sync 25.5 Mb from your phone on your shitty 2 bars of 4G T-Mobile network. That’s going to take a while.  And if there’s an interruption during sync, that might result in lost/corrupted photos.

You can keep bloat from happening very easily with 2 controls:

Now lets do some more math, using the same example above:

Does the image quality suffer if you auto-reduce the photo size?

Yes, a little bit, but for purposes of field forms, not enough to make any difference whatsoever.  Unless you are doing some crazy super high resolution stuff like the folks at Imago do (taking high resolution images of rock core), it makes absolutely no difference.

To prove this, take a look at the images below.  The first screenshot is of my SketchApp canvas at 25% of actual size.  Here you will see 4 different image resolutions of a bottle of wine.  The leftmost image is the original 2.3 Mb image that I took with my iPhone 13 Mini.  The 2nd image from the left is the same image downsized to 1,080 pixel width, and the far right is the same image downsized to 540 pixel width.  Notice the different file sizes and dimensions.  I’ll make it easy and put that info in a table below. 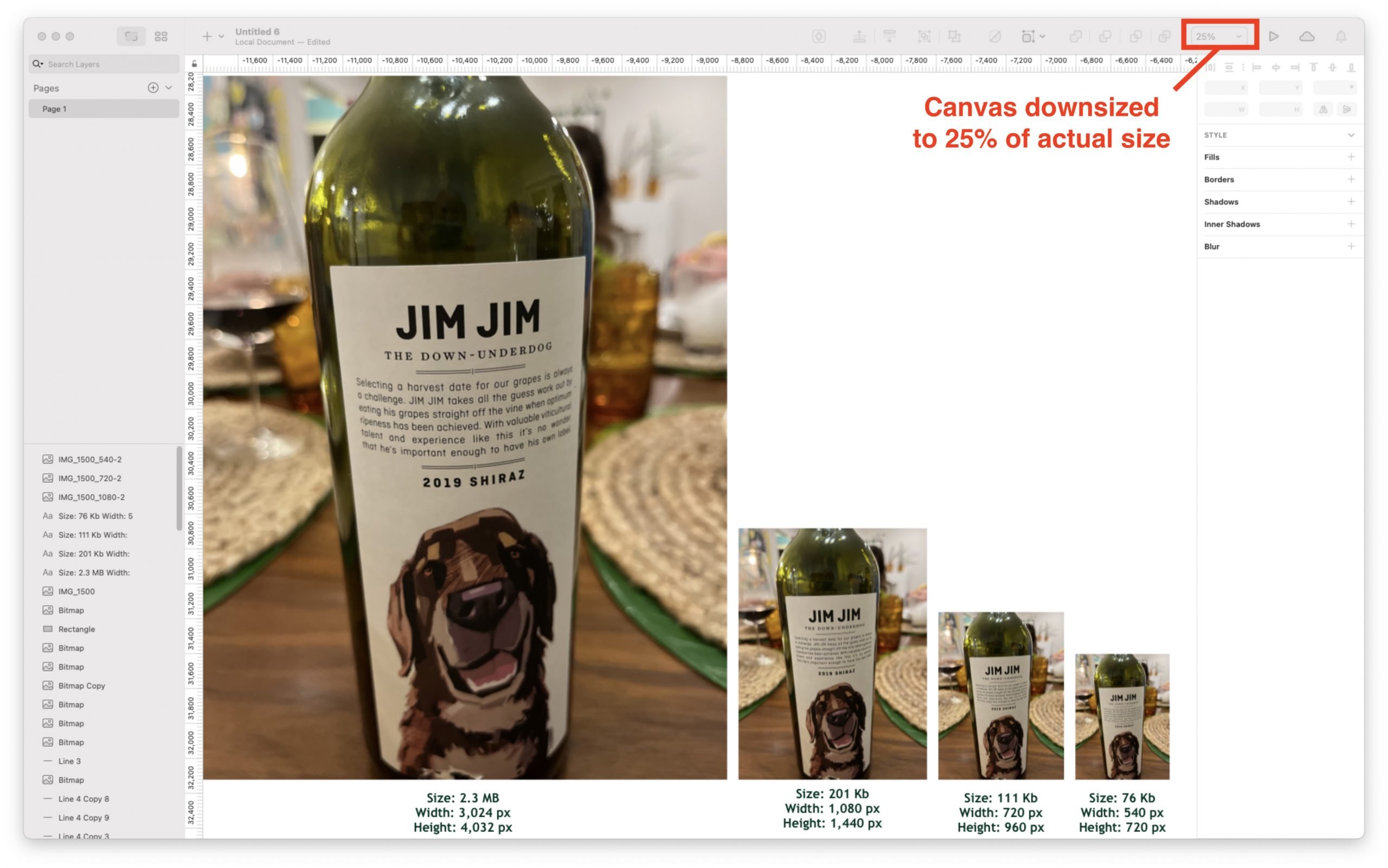 Now take a look at the SketchApp canvas at actual size.  Because my 27 inch monitor isn’t large enough to show the whole SketchApp canvas, only the 720 pixelx width and 540 pixel width images are visible below.  Can you tell any different in image quality?  I can’t.  And neither will anyone looking at the image on an online photo viewer gallery or even on a printed PDF document. 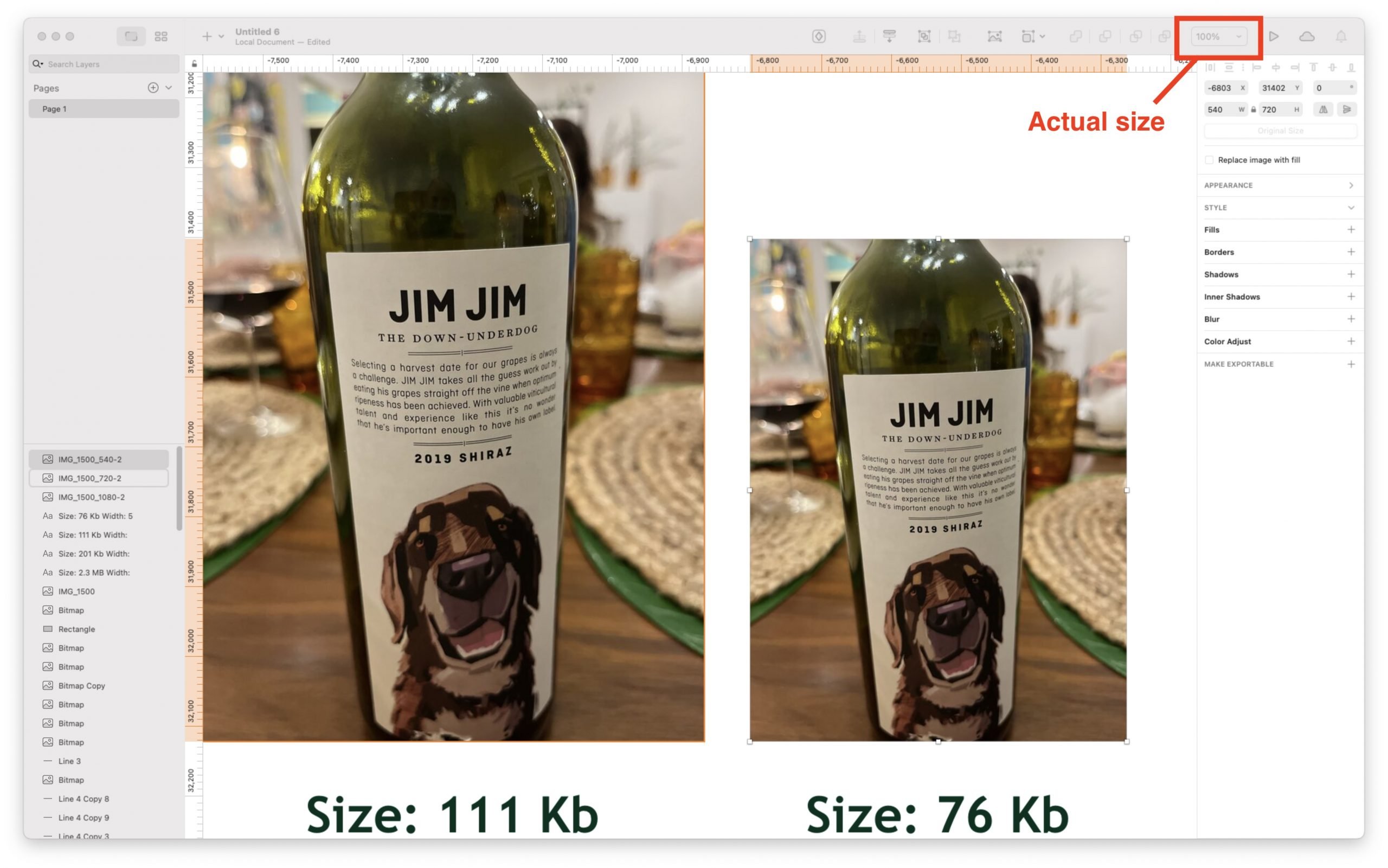 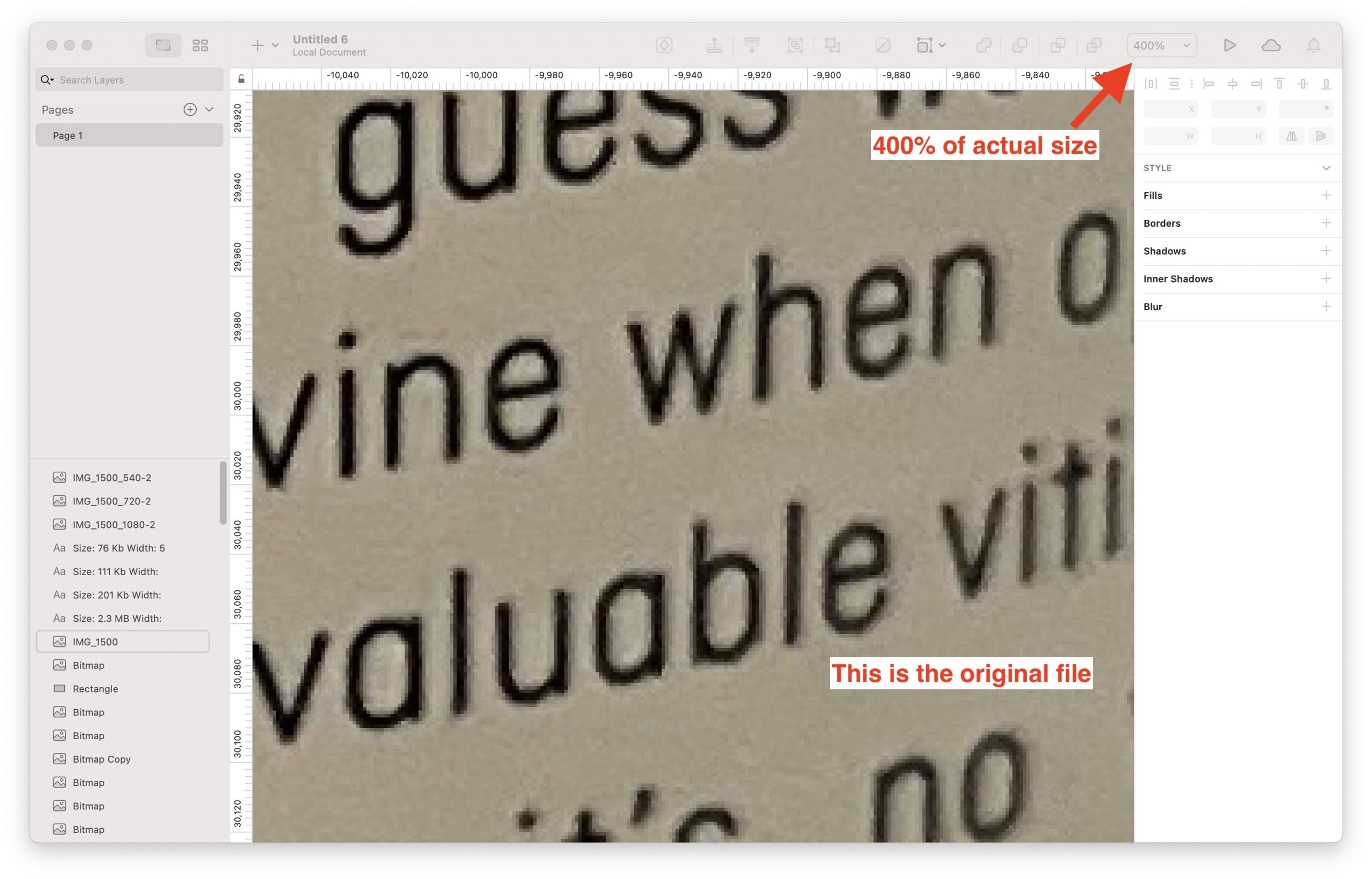 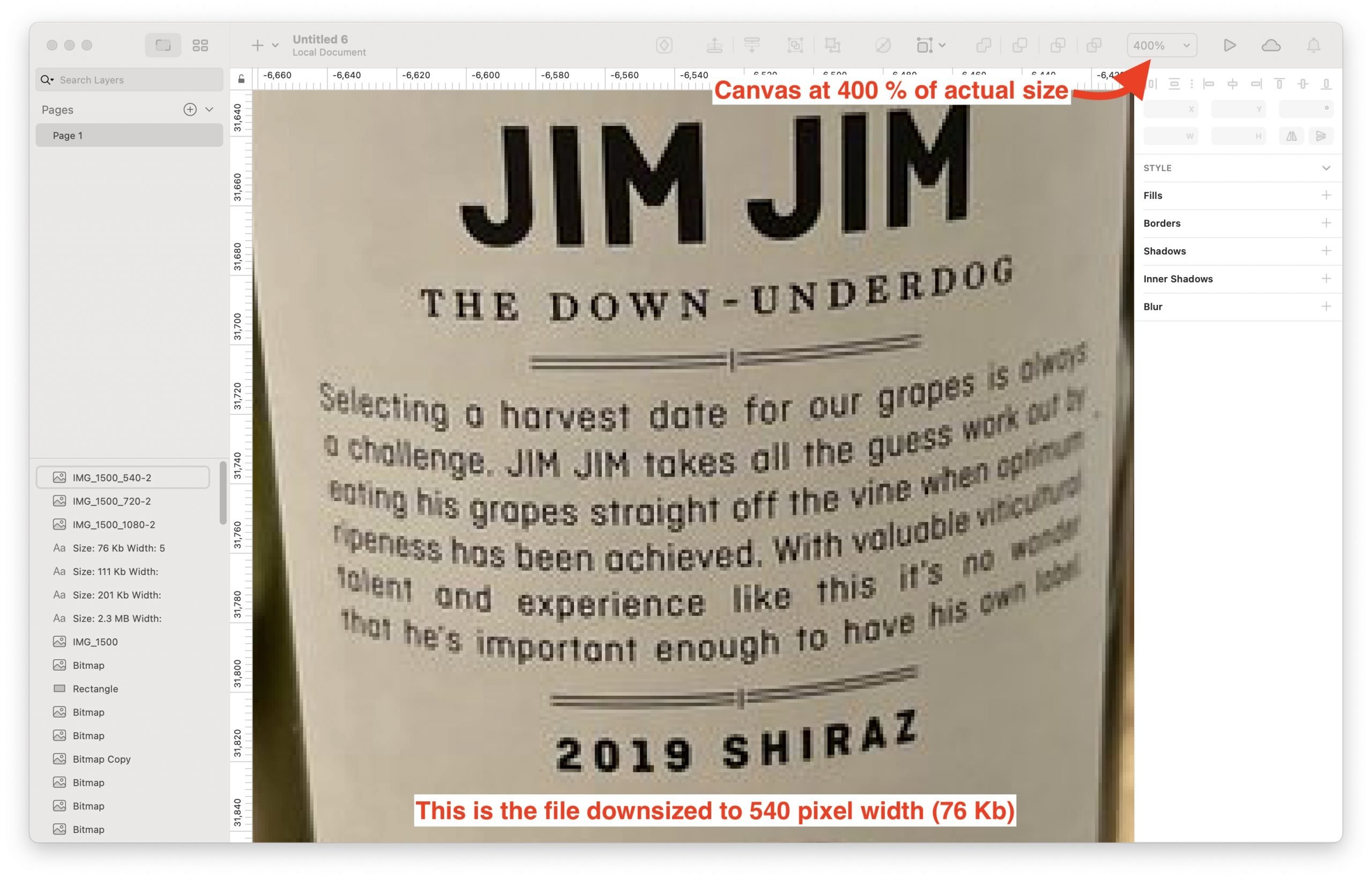 Yea sure, there’s a difference, but only if you are looking at the image zoomed in and looking at the pixelation.  But…and here’s the important part…

when was the last time you needed to zoom into a field photo up close like that??

You get the most bang for your (image resolution) buck at 1,080 pixel width

If you look at the table above, it’s evident that the biggest reduction in image file size benefit occurs when you downsize an original image to 1,080 pixel width.  That’s a reduction of 91% of the file size.  And if you are going to be taking a lot of pictures for a particular form type, you can always go to 540 pixel width to reduce the file size another 6%.

Available controls in the XForms Designer to customize the image field

In the XForms Designer, you can set the image quality to whatever width you want.  And you can also control a few other things. Here’s a list of the available controls with the Image field:

Here’s a screenshot of the image control in the Designer. 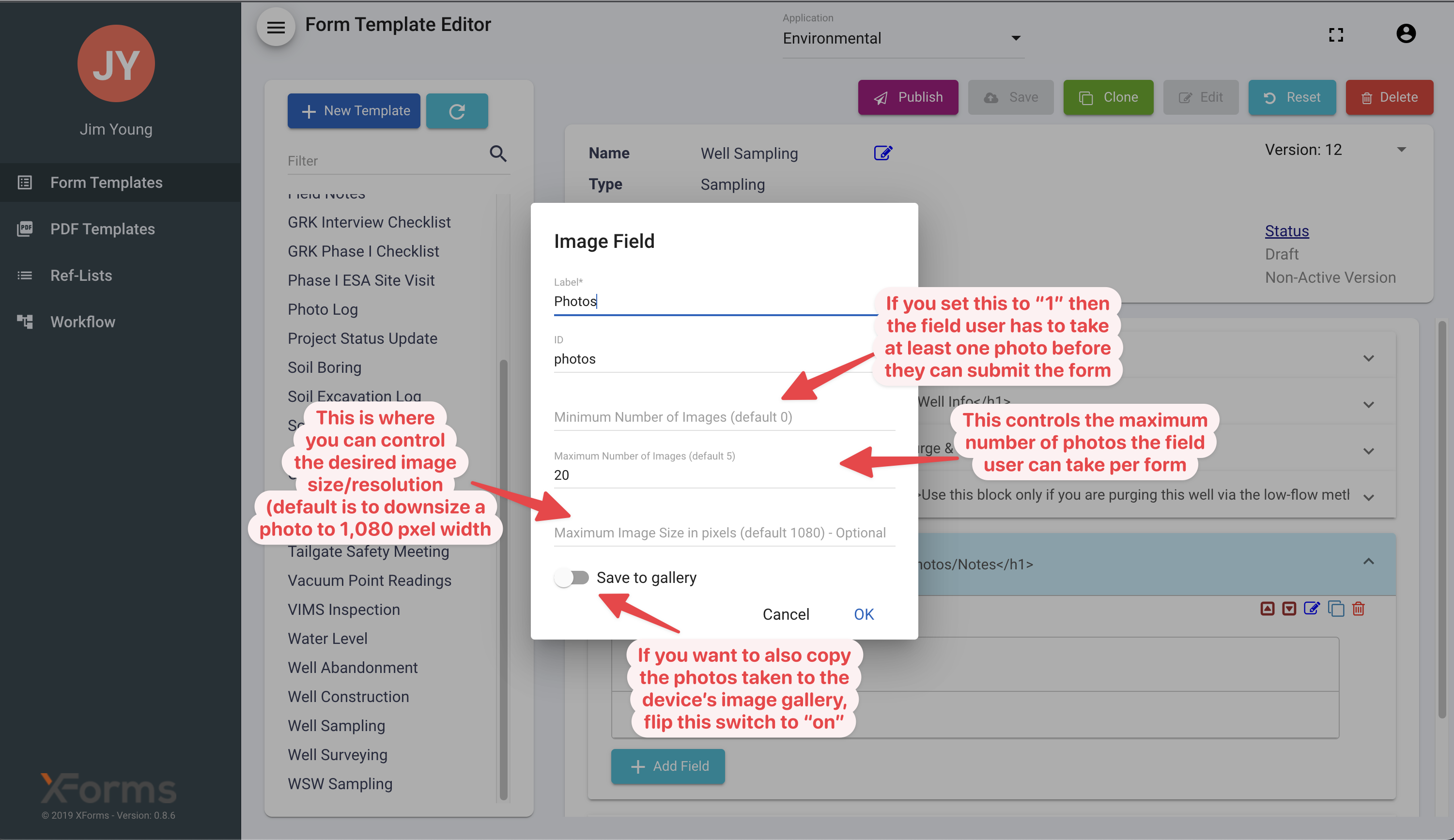 Want to take a closer look at XForms, and what it can do for your team?