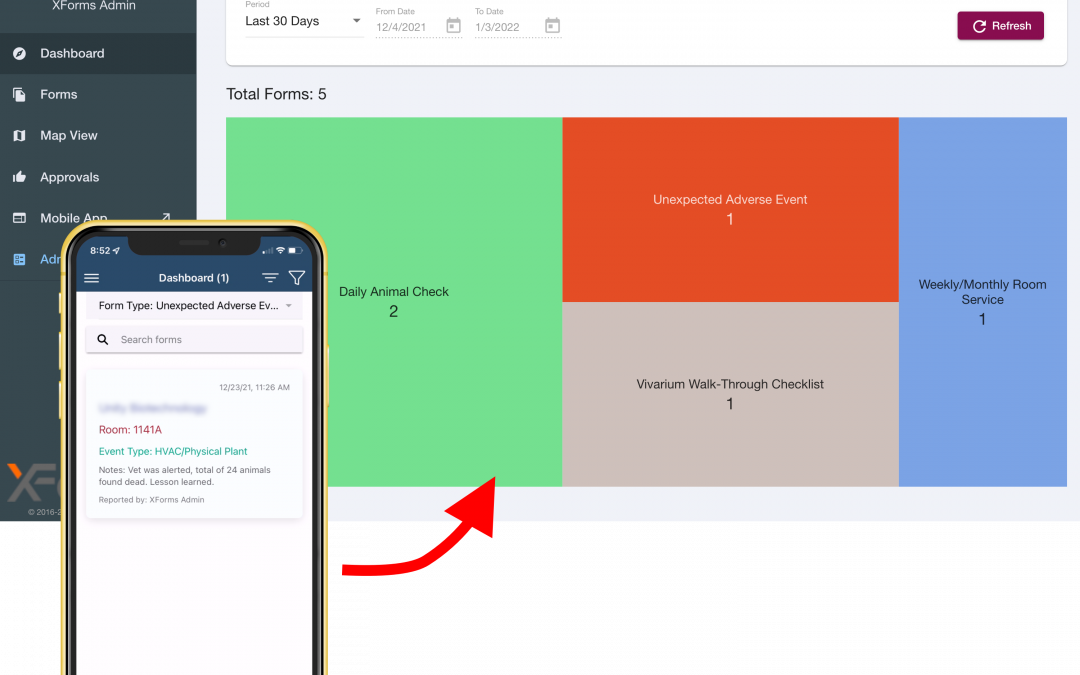 Those drug commercials you see on tv keep vivariums busy

I’m sure you’ve heard all of those drug commercials on tv.  Yea, those commercials.  The ones that show people skipping through beautiful meadows, doing fun life things, holding hands with their significant other and smiling into each other’s eyes, all while the narrator explains a million side effects and things that could go wrong if you take that happy pill.

So…what’s the connection between those drug commercials and vivariums?

Well, all of those drugs have to be tested to see if they work or don’t work.  And they are first tested on small animals before being tested on humans.  Thousands and thousands of mammals such as mice, rats, guinea pigs, rabbits, and even primates.  This need has created a cottage industry of vivariums, a vital aspect of the drug testing process.  Without vivariums, there would be no new drugs hitting the market.

Here’s a picture of one such vivarium. 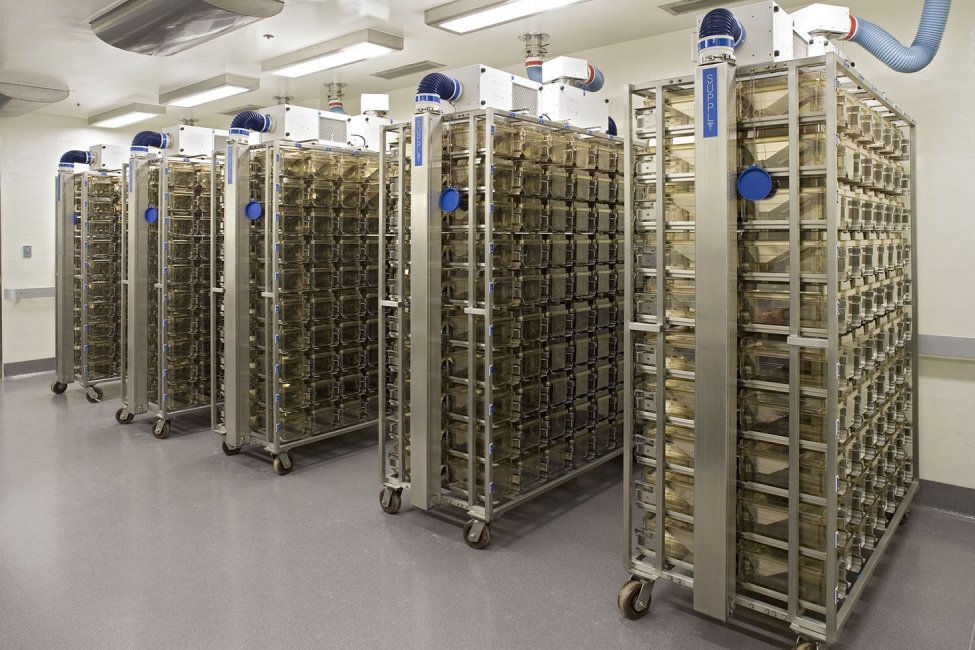 In the picture above, every single cage in each rack contains rodents.  And each cage has to be tracked carefully because the animals in each cage are undergoing very specific drug tests.  These animals are typically purchased by a drug manufacturer, and then handed to a vivarium company for housekeeping.  Sometimes the drug company also manages the animals in their own vivarium.  But nowadays—more often than not—the drug company will outsource animal housekeeping to a third party so that they can focus on the drug testing side of the business.

Maintaining animals undergoing strict drug testing procedures—i.e., giving them adequate food, water, basic hygiene, and wellness on a consistent basis—is something that cannot be taken lightly.  Anything that goes wrong with the animals could throw off a long-term drug test and have cascading effects and HUGE time and money costs downstream.  Something no one wants when you are talking about coming up with the next Noazzatall.

So to ensure the validity of the animal tests, record-keeping has to be done daily for each room, rack and cage.  Data collected includes information such as:

How are these daily checks documented in most vivarium operations today?

Most of these animal checks are documented manually, on paper forms.  You’d think that in today’s modern world, where everyone is glued to their Instagram feed and checking how many “likes” they got on their last post, the companies that bring you Cialis, Viagra, and Buttblowtazeem would have mostly already switched to digital data collection and documentation of their wondrous magical pills’ animal tests.  Tests that are there to prove out the efficacy of their potent pills and non-harmfulness of such to humans.  Unfortunately, the reality is that no, most data is not being collected any differently than in decades past.  It’s still mostly collected using paper forms and hand written notes.

Here’s an example of a typical rodent log form. 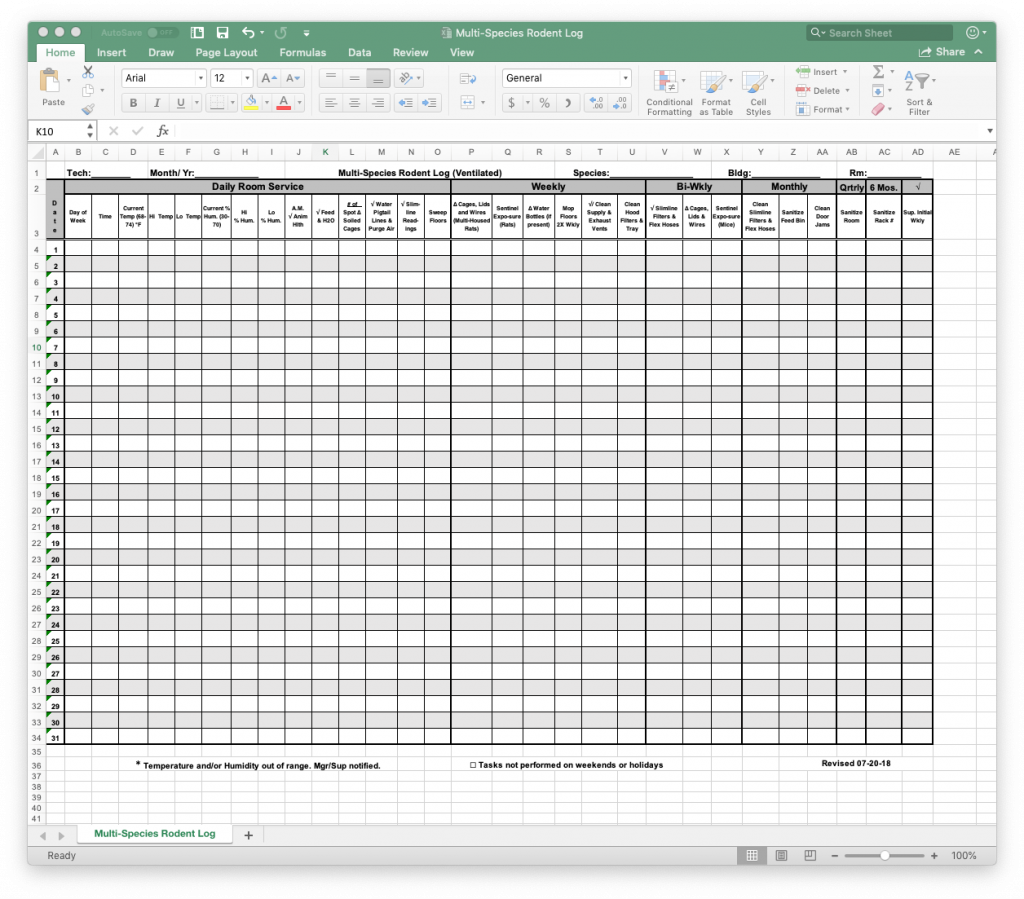 In this example, the form template is in Excel.  Each row is a calendar day of a month.  At the top of the form, you can see that the form is specific to a given room and species.  So if there are rats and mice in the same room, there would be 2 of these forms stored in the room.

When the vivarium employee conducts their checks, they pull out the log book in the room which contains a printed version of the above-Excel form, and they jot down their data on the paper form—with a pen of course—one row per day.  When done, they leave the form in that log book stored in a particular location within that room, go to the next room, and repeat.

So… what’s so bad about this paper workflow in vivariums?

Well, nothing is actually wrong with it.  It’s worked just fine for decades.  But with modern technology, there are more efficient ways to do this.  Let’s first take a look at just 3 of the more obvious issues with paper form documentation of vivarium operations:

In a paper-based vivarium data collection process, the forms are filled out by hand and stored in the rooms housing the animals.  If the FDA or client asks about a particular room’s data, someone will have to go to the vivarium, pull the correct sheets, and scan them or take a picture of them.  Then route these scanned images via email to the person asking to see those records.  While not complicated, someone still has to do this.

This goes without saying.  Sometimes it’s hard to read someone’s handwriting.  Here’s a screenshot of a rat log that shows a value that was scratched out and written over.  While in this example, it’s pretty clear that the value in question is “42” because of the other rows around that one (ie, the context within the sheet), its not always this cut and dry.

3. The data is analog…you can’t do anything with it unless it’s later entered into a spreadsheet

When you scan a paper document to PDF, it’s basically a picture.  You can’t really do anything with it unless you run OCR on the PDF.  And OCR has its own set of problems.  Usually, this means that if you want to look at trends, run some basic statistics such as average temperature, mean humidity, or other more complex things like trying to correlate temperature fluctuations with the health condition of animals, you are going to have to enter that information into Excel or some statistics software package.

So basically your org is spending payroll dollars to enter the same data twice: once onto paper, and a second time transposing this from paper to Excel.

What if vivarium data was collected using smartphones and tablets?

We’ve been working with a few folks in the vivarium industry and have designed a simple, customizable solution that can resolve some of the paper/data hassles in the vivarium space at little cost.  It involves smartphones, form templates, and a simple, dynamic dashboard.

STEP 1:  Design Your Own Unique Forms

Every organization has their own way of doing things.  So rather than using some canned forms, build your own.  These typically include—as a start—the following form templates: 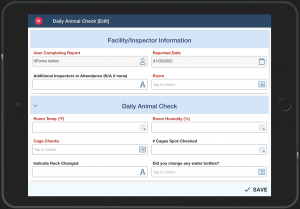 This is where the magic happens.  The forms mentioned above can be easily developed using our Form Template Designer tool, which is easy to use and become proficient with.  You can build simple forms with it, and even more complex forms that require Excel-like table grids with calculations.

You can create forms that require someone else to review and approve or reject them.  We call this an approval workflow, which is an optional built-in feature.

Point is…most any type of form can be developed fairly easily with the XForms form template designer, including vivarium forms.  Here’s a short looping video of the form template Designer screen in action.

Test out your unique forms before going live.  Use a phone, tablet, or laptop to test, then tweak the forms as needed, and repeat until the forms meet your needs. Do this with your staff that will be actually using the forms in the field A lot of folks want to skip this step, but it’s critical if you want the staff to embrace your solution.

What key performance indicators matter most to you? Maybe you want to see trends, like what major event types are contributing the most to unexpected adverse events.  Or maybe you want to be able to quickly see the average room temperature over a certain period of time.  Like mentioned previously, everyone operates differently, so why settle with a standardized dashboard when you can create your own unique one, and track different things for different form types?

Set up your users with the right permissions, train them on the basics, and have them give it a go!  And be patient.  In the beginning, issues will arise…this is inevitable whenever a major change occurs (like switching from paper forms to digital ones), because people generally don’t like change.  But as long as you work with your staff instead of forcing them into something with zero feedback or collaboration, it should work out great! 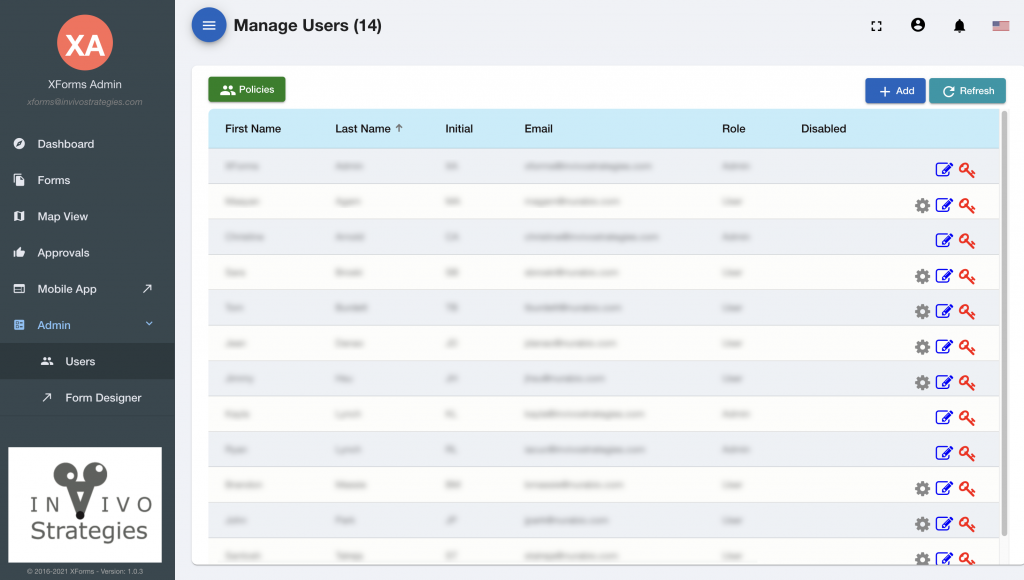 In Vivo Strategies, located in San Francisco, is using the XForms solution described above for several vivariums they manage.  In fact, Christine Arnold, founder of In Vivo Strategies, helped develop/optimize some of the forms described and certain features of the system, including the password policy module of XForms, which allows the application administrator to establish minimum complexity rules for user passwords.

Before using XForms, we managed our vivarium data using Google Forms and Google Sheets.  While that home-grown solution was an improvement over paper, the XForms system we are using now is vastly superior. Partly because it’s easier to use, but also because it provides us exactly what we need and nothing more.